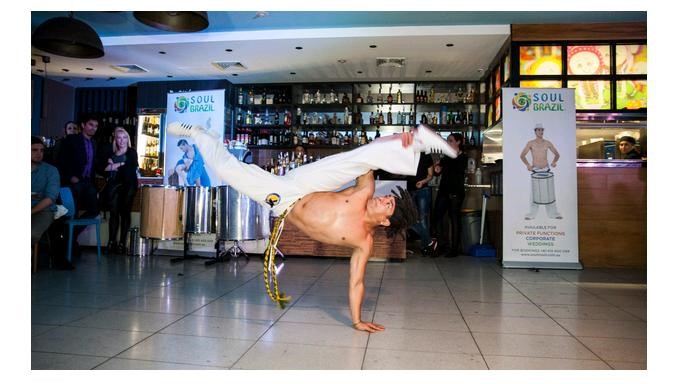 What You Need to Know About Capoeira

The Elements
Capoeira is an art that involves music, movement, and some practical philosophy. The essence of the martial art form can be experienced by taking part in a Jogo, a game of capoeira. In this ritual, two practitioners exhibit attack and defense movements constantly while observing the correct manners and rituals of the martial art. The aim is to explore their weaknesses and strengths, their fatigue and fears, and they do this by showing the attack and defense motions in a way that confuses the other player. The Jogo is fun, but can be frustrating and challenging at times. Nevertheless, it helps practitioners express themselves and reflect on themselves.

The character and speed of the game are determined by the rhythm of a single-stringed musical bow known as the berimbau. Other instruments used in the Jogo are the pandeiro (tambourine), agogo (double bell), reco-reco (bamboo segment that is scraped with a stick), and atabaque (a single-headed drum). Joining in the hypnotic percussion are inspiring solos and songs, and the result is a musical ambience that is just right for the session.

The session is called a roda de capoeira (capoeira wheel). It is composed of a ring of participants which defines the space for the two practitioners in a ritualized sparring session. 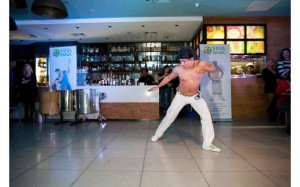 The Origins
Its origins are hazy and heavily debated even to this day, but one thing is certain: it started as fighting style for the slaves that came to Brazil from Africa. Concerning its exact origins, there are three ‘schools of thought:’ a.) that it already existed in Africa, b.) that it was created by Africans in the rural parts of Brazil, and c.) it was created by Africans in major urban areas of Brazil.

Elements of dance were only included so the early Brazilian capoeira performers could practice without arousing suspicion. Eventually, it became a favored martial art among criminals, and authorities have, at different times, outlawed it.

Today, many people across the globe are practicing the martial art, following the footsteps of famous meters (masters) like Mestre Bimba, Mestre Pastinha, Mestre Joao Pequeno, and Mestre Joao Grande, among so many others. Considering the difficulty of the martial art system, those who have been doing so for many years are admired for their dedication, a trait of all the famous mestres.

Capoeira Today
While some practitioners teach the craft to those who are interested, others learn the different aspects of the art out of curiosity. Still, there are others who combine capoeira moves with the moves of other martial arts disciplines to create devastating cocktails of strikes and holds for MMA fights. Famous capoeira practitioners in the MMA world include Anderson “The Spider” Silva, “The Notorious” Conor McGregor (and rival Jose Aldo), and “Showtime” Anthony Pettis. They may have applied a thing or two taught by some of the most famous living masters (mestres): Mestre No (Norival Moreira de Oliveira), Mestre Sombra (Roberto Teles de Oliveira), Mestre Um-por-Um (Nilton Machado de Almeida), Mestre Beija-Flor (Gilberto Quini), Mestre Russo de Caxias (Jonas Rabelo), and Mestre Chinaxe (Milton Raimundo de Jesus).

Among those who do not compete in martial arts tournaments as a profession, the most well-known performers include Wesley Snipes, Lateef Crowder, Vincent Cassel, and Joey Ansah, Amen Santo and Marc Dacoscos.

Many of those in the three groups do live public or private performances, and they do not work independently. In the Oceania region, for example, the best capoeira performance company to hire for live capoeira Shows is Soul Brazil.

All of the dance company’s Brazilian capoeira performers and performers of other dances work full time and are trained only by Australia’s best choreographers and dance teachers. The company’s director, who has decades of experience in the field of performing arts, ensures that only the best dancers make it in the company, and this means high-quality entertainment for you and your guests, whatever the season.

This entry was posted in Blog. Bookmark the permalink.